By Presentos on February 21, 2015 in History, Information

In Commonwealth navies, one form of identification of a ship is her “badge”.

The “Ship’s Badge” takes a number of forms depending on the use of the item. However, traditionally, the Ship’s badge is mounted on the superstructure of the ship.

We at Presentos will refer to the device as a ships badge, although many will call it a “ship’s crest”. The term “crest”, in heraldic terms, means “the symbol or device borne on top of the helmet”. Given that ship’s badges consist of items that have meaning in heraldic terms, we are trying to minimise confusion.

The ship’s badges of the RAN consist of a number of discreet items to form the entire badge.

The Naval Crown, Name Scroll, Rope Circle, Motto Scroll, and the “trophy” (the boomerang, nulla nulla an stone axe) are common to all commissioned warships. The letters in the name scroll, the letters in the motto scroll and the image within the rope circle are unique to each ship. A smaller device called a “Boat badge” may be utilised for small craft attached to a ship. On a boat badge the trophy and the motto are omitted.  This is an image of one of the ships boats from HMAS Sydney.  Evident on her bows is a boat badge. Additionally, where “tampions” (a stopper/cover for the muzzle of a gun) are used, only the rope circle is used. 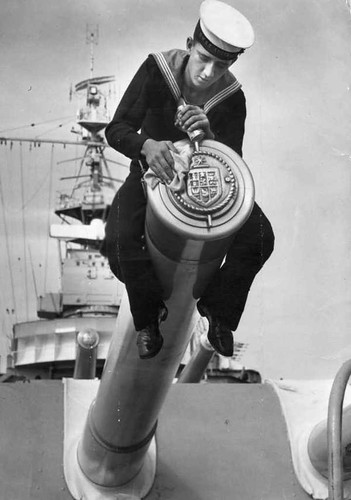 Each use still displays the emblem within the rope circle.

For non-commissioned ships, establishments and other entities, a modified badge is used. In some instances, a royal crown is used instead of the naval crown.